29 years of a collective adventure

The story of Pride Marseille equates to 29 years of a collective adventure, starting in the early 90s in the emergency of the AIDS epidemic and perpetuated over the years until today. We went from the few hundred people who demonstrated in 1994, to more than 25,000 voices who are responding today to commemorate the memory of Stonewall. In Marseille, we are proud of the heritage that has been passed on to us and that we, in turn, will leave to future generations.

Since its creation in 1993, Pride Marseille has mobilized hundreds of volunteers who are committed to ensuring that Pride Marseille exists, that Pride Marseille works, that Pride Marseille develops its actions... This story has been militant and festive, cultural, sometimes conflicting, while still carrying the collective memory of Stonewall, along with our hopes and the demands of the LGBTI+ community. We cannot name all the people who have signed up to serve Pride Marseille, but we can recall the names of those who have piloted or chaired the organization: Christian De Leusse, Marc Billioud, Jean-Marc Astor, Christophe Lopez, Gilles Dumoulin, Philippe Murcia, Sarah Saby and Alain-Marc Deluy, Éric Séroul, Noémie Pillas and Philippe Amidieu. Alongside the volunteers, these volunteers have made it possible to write the most beautiful pages of our story.

The story of Pride Marseille began in 1993, when the Collectif Gai et Lesbien organized a first Pride gathering on Cours Julien. The following year, the first march was organized and went from the Mobile des Réformés to the Cours d'Estienne d'Orves, bringing together around 1,500 people. In 1995, the Association pour la Création d’un Centre Gay et Lesbien à Marseille (ACCGLM) initiated the creation of the associative bar Le Chaperon Rouge (rue Colbert – opposite to the former Colbert post office) and brought together Marseille associations around an ambitious project for Pride Marseille. More than 5,000 demonstrators gathered on the main staircase of St. Charles station and marched towards the Cours d'Estienne d'Orves. For the first time, Marseille's LGBT businesses are closing their doors and taking part in the "Gay & Lesbian Unity" evening which welcomes 2,200 people at the Friche Belle de Mai. 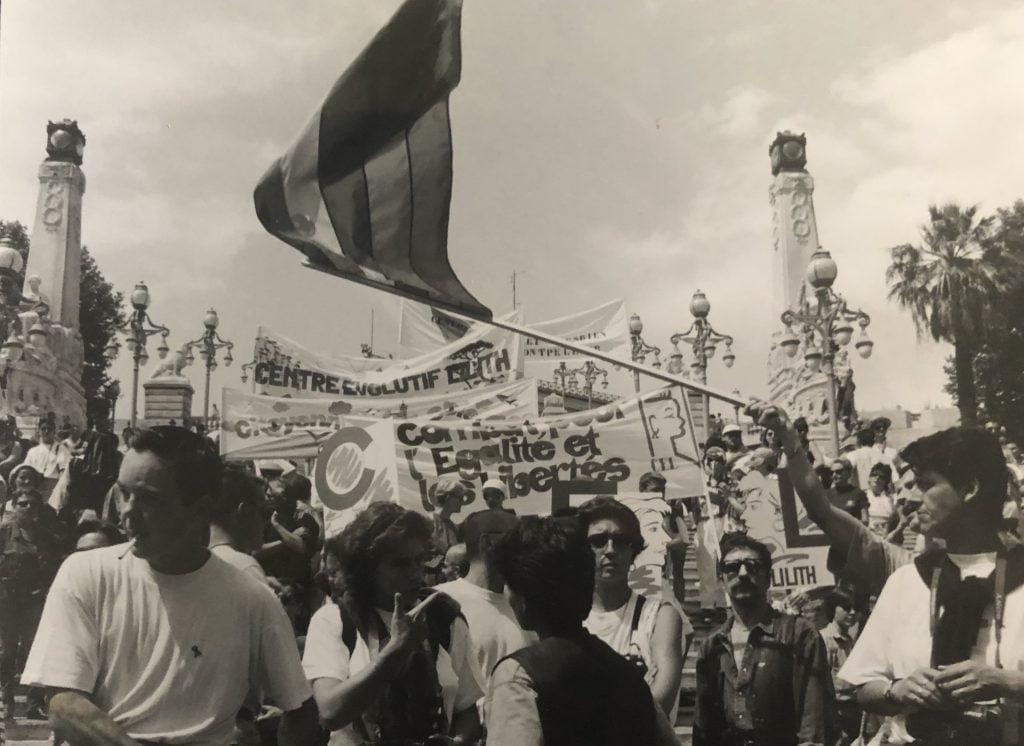 The following year, the associations met in a Constituent Assembly and decided to create the Lesbian & Gay Pride Marseille association. The same year, one year prior to the EuroPride Paris 97 which was organized for the first time in France, all the French Lesbian & Gay Pride met in Marseilles to create the Coordination InterPride France, and decided in particular that the Pride Marseille will close every year of the Pride season, the first Saturday in July. The March brought together more than 8,000 protesters, going from Place Castellane to the Vieux Port. The 2nd edition of the "Gay & Lesbian Unity" evening was organized at the Dock des Suds for 4,000 people. The years 1997 (Marseille's participation in EuroPride and the Gay Social Salon), 1998 and 1999 saw the actions carried out by Lesbian & Gay Pride Marseille, now recognized at national level.

The year 2000 marks the climax of these first years of existence. The magazine Têtu devoted a dossier to the 50 personalities who make Marseille's LGBT life vibrant. Our Lesbian & Gay Pride is described as "the most beautiful Pride in France, under the July sun". This year, 12,000 people marched on the Canebière and the 5th edition of the "Gay & Lesbian Unity", the biggest LGBT party in France at the time, gathered nearly 6,000 people at the Dock des Suds.

Throughout this decade, the Lesbian & Gay Pride Marseille association continued its activities, including the organization of a militant week (cinema, conferences-debates, exhibitions...), acquired premises on the Boulevard de la Libération, and financed itself thanks to the proceeds of the evening which became the "Sunflower Party". In 2006, following the fire at the Dock des Suds (September 2005), the organization was forced to invest in the Marseille Fair with varying degrees of success. On its side, the Gay Pride March, which now extends from the Vieux Port to the Parc du 26ème Centenaire, exceeds the 18,000 demonstrators mark.

The following years, the return of the evening party in the new Dock des Suds will not be the same. In 2009, the City of Marseille proposed to organize the party at the Palais des Sports. The popular success of the event, which brought together nearly 9,000 people, will not make us forget the criticism of an evening party stopped prematurely (around 3:30 am) by the technical services of the sports hall. Stronger and stronger criticisms of the associations which feel abandoned by the organizers add to this contingency.

In 2010, the Tous&Go association proposes an updated and more dynamic program by accentuating its communication via social networks (Facebook, YouTube). For the first time in its story, the March for Equality brings together more than 20,000 people from the Parc du 26ème Centenaire to the Vieux Port. At the same time, the association Lesbian & Gay Pride Marseille reaped the rewards of its work and won the organization of EuroPride 2013. Unfortunately, this simultaneity will lead to conflicts that will result in the organization of two competing marches in 2012. At the same time, the team that brought back EuroPride leaves the chaotic organization of the event. EuroPride 2013 will conclude with a popular and financial failure (less than 30,000 people at the March and failed parties). Nevertheless, the associations managed to pull out of the game by proposing a quality militant program, notably around the new Collectif IDEM (EuroMediterranean Forum).

In 2014, it was under the impetus of this collective that the associations came together in an Inter-Associative and Commercial Steering Committee which each year appoints the association that will carry the Marseille Pride. This is how Pride Marseille was reborn from its ashes, offering a cultural week, a march that brought together 15,000 people from the Palais Longchamp to the Vieux Port, and an aperitif-concert on the square in front of the Hôtel de Ville (Vieux Port). In 2016, the IDEM Collective was forced to postpone the Pride March because of the World Cup. It will finally be cancelled after the attack in Nice, 48 hours before the event, for security reasons (decision of the Prefecture of Police). Postponed to September, the 24th Marseille Pride gave birth to the 1st Longchamp Pride Day.

In 2017, the association AGIS-IBIZA is appointed as the carrier association. Organized in the emergency, this edition will not allow to organize other events than the Pride March. Nevertheless, the mobilization of 20,000 demonstrators led the Steering Committee to renew its confidence in the association AGIS-IBIZA. In 2018, the organization fights to maintain the aperitif-concert but the negotiations with the city hall of Marseille drag on and the event must be cancelled at the last minute. The success of the March and the Week of Events, including the organization of the first PrideMed conference (the organizers of Pride in the Mediterranean) and the launch of the Marseille Appeal, nonetheless bode well for the future. In 2019, the Pride March will bring together nearly 25,000 people and the 2nd edition of Longchamp Pride Days will bring together nearly 10,000 festival-goers, over two days at the Palais Longchamp. 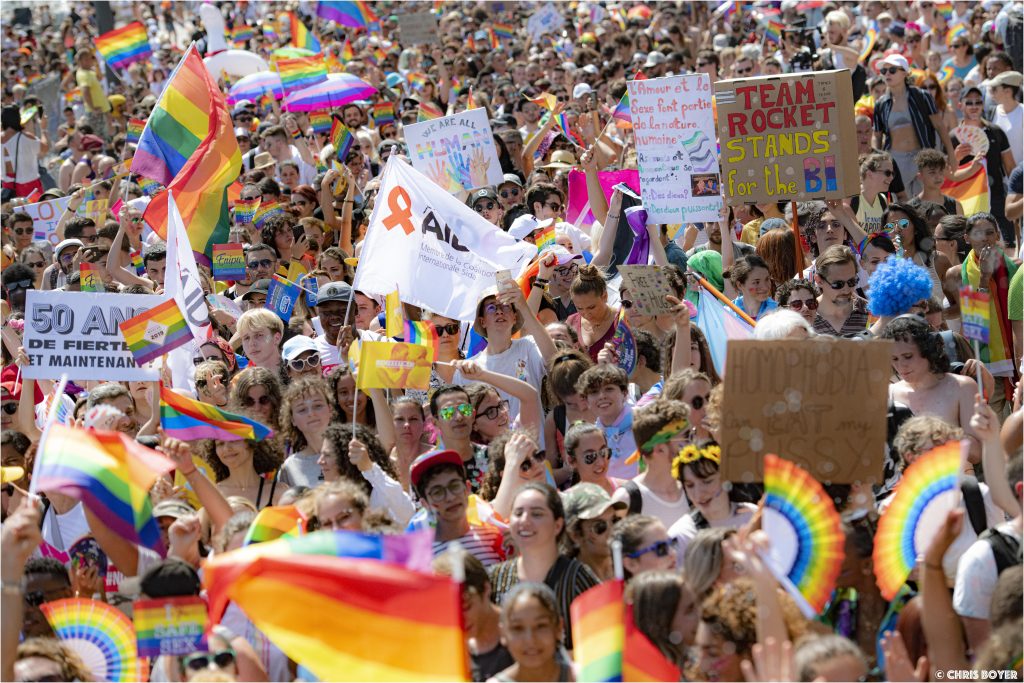 In 2019, among the projects developed by the AGIS-IBIZA association, the Inter-Associative and Business Steering Committee validated the creation of an association dedicated to the organization of Pride Marseille. The association Fierté Marseille Organisation was therefore founded on September 12, 2019. Its objective is to carry the organization of the LGBTI+ Pride events on behalf of the Steering Committee. Depending on its results, it will be renewed each year in its functions.

The 2020 edition of Pride Marseille was preparing under the best auspices before the beginning of the health crisis of Covid-19. In the end, the March and the Pride Festival were postponed to September, before being cancelled. The 27th Marseille Pride nevertheless proposed a "General Public" communication campaign around the theme "Exist, Persist, Resist", a PrideWeek in which most of the events were maintained, and a Virtual Pride broadcast via social networks. Paradoxically, although it was unable to march, the Marseille 2020 Pride nevertheless benefited from exceptional visibility, notably thanks to the lighting of the City Hall in the colors of the Rainbow Flag... And the story continues...